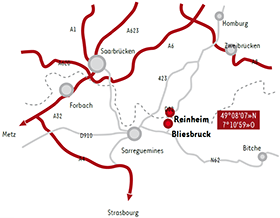 Preventive archaeology is aimed at carrying out, in a timely manner, the detection, conservation or preservation of archaeological heritage likely to be affected by public or private town planning works. It also has as aim the interpretation and dissemination of results.
A 2001 law, amended in 2003, regulates the operation which the Ministry of Culture and Communications is in charge of implementing. Operations related to town planning and deposited for authorisation (building or subdivision permits ....) can result in prescriptions laid down by the State. Local authorities do not have the regulatory powers in this area but they can develop archaeological services which, when approved by the Ministry of Culture, may undertake preventive archaeology operations. This is the case of the Moselle Departement since 2008.
Two distinct field operational phases are planned:
- the diagnosis is intended to detect the possible presence of remains and to determine the nature, the dating and the state of conservation.
- diagnosis in case of a positive result can be followed by an excavation.
Diagnoses are financed with fees paid by public or private persons planning to carry out works affecting the subsoil. For excavations, the cost of the operation is fully borne by the developer, except in cases of exemption.

In addition to preventive operations related to the development of the site of Bliesbruck, the team of archaeologists also carried out operations within the Moselle Department. This was the case in 2005 during an operation at Lindre-Basse where archaeologists monitored developments, after the drying up of the pond of Lindre. In 2009 and 2010, the team intervened in the tracing of the future high-speed line in Dolving and Sarraltroff and excavated a Gallo-Roman villa and a necropolis of the Late Bronze Age.
In 2011, excavations were conducted in Kédange-sur-Kanner, prior to the construction of a new college by the Moselle General Council. A habitat of the 800s BC was unearthed.
Since 2013, the team has intervened on multiple sites detected within the Illange Megazone and which reveal an almost continuous occupation of the Bronze Age to the Merovingian period.